Sell! Sell! Sell! You guessed it, this week’s task on the Apprentice is all about selling. Each team must select two innovative products to sell to retailers, but they’re given individual order books and told to get as many individual sales as they can.

Again, this is not a task with a great deal of complexity. Choose the right product for your target audience, and close the sales. Pitfalls might include any kind of exclusive offer, or any significant discounting.

Empire, led by Mona, chose a pet product a double handled dog lead called Lovers Lead, which I had doubts about but the pet shop owners were interested in. Their second product was a sleeping bag with arms and legs, sort of a sleeping bag crossed with a Michelin Man suit. Ugly – but I can imagine people using it. In any case Mona negotiated a sale straight away.

Ignite, led by Lorraine, chose a bike bag and a cardboard cat box. I have a cat, she loves boxes but I’m not sure I’d buy one that looks like a firetruck for her. I also have a bike, but the bike bag on offer is hopeless, stuff would fall out of it. So I’m curious about what will get sold.

At 6pm it was all over. Orders and Sales were added up. The teams went back to the board room to hear the results. Sir Alan was annoyed that neither team had really chosen products for the two pitches he’d set up. These were with buyers with big purchasing power so it’s a gift. Usually it takes a lot of effort to get into a sales meeting with such a buyer. Instead they thought they’d make more on the second day in meetings that they had to set up themselves. It appeared that Kate, Ben and Philip messed around in the task – it looked like they figured Lorraine would get fired so they didn’t need to work. 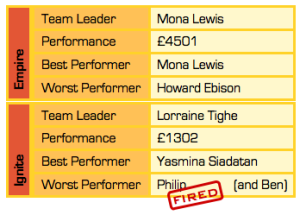 Quote of the week might be Lorraine “I’m a bit of a slow burner in the thinking process”. And she said it like it was a good thing.

Sir Alan did his best to draw out the tension on the results but it was a clear win for Empire with a total of £4501 in sales against a meagre £1302 for Ignite. So then who was responsible?

Yasmina and Lorraine made all the sales, which is pretty much a get out of jail free card with Sir Alan. Lorraine took Kate and Philip into the boardroom, which I thought might have been a mistake.

But Lorraine dropped their “relationship” into the discussion and her boardroom tactic became clear.

It worked. Sir Alan is already fed up with Philip’s attitude and it wasn’t long before he said “Philip, you’re fired”.

One thought on “Apprentice 7: For Sale”