There are a few components to consider;

I think the interaction between these five components is what makes being a good leader so complex, I’m not complaining – if it wasn’t challenging it wouldn’t be so much fun.

There have been a lot of theories written about personal leadership style, perhaps the biggest classification was made by the US Army who developed  a list of six styles, each with positives and negatives, the way the army writes it there are some styles they can’t use, but here’s my summary.

It’s easy to see how these roles could map to a Belbin analysis to help you understand your preferred leadership style. In Belbin I score highest on “co-ordinator” and my natural leadership style is “Democrat”. I think “shaper” probably maps to “pacesetter” and so on.

It’s also already easy to see that there isn’t one style that will be right all the time. As an aside one of the ways candidates become unstuck on the Apprentice is by trying to use an authoritarian style, it won’t work because their status is the same as that of other group members and there isn’t enough trust amongst the candidates to allow someone to take on leadership for the duration of the task.

We’ve just come through an intense period at my company, we’ve had government assistance, a change of CEO, a round of redundancies and one or two divestments. My normally coaching/democratic boss had to be more authoritarian, his normally democratic/authoritarian boss had to be somewhat coercive. So sometimes the external business environment is going to require a shift. If the environment change is permanent the shift might become unsustainable.

I’m leading a team of professionals, experts in their fields. For most of them I could not take over their tasks. I was promoted from within the team and I know that an authoritarian approach would not work. I do use coaching style sometimes, but doing that all the time with such experts would border on patronising. So knowing your team and their situation impacts how you approach leading them.

The Person Being Led

I think everyone has had a manager that just didn’t work for them, I’ve heard complaints ranging from lack of information, to micro-managing. Personally it’s important for me to be solving problems and innovating, so I struggle with coercer or authoritarian bosses. But a former boss who is a coercer by nature has a loyal team, so clearly it works for some people.

I think it’s helpful to understand that the dynamic between leader and subordinate might come down to a style issue; it’s not you, it’s the combination.

It sounds simple enough, except that a subordinate could be at a different stage for different tasks, and that they could move back a step under varying circumstances.

Which Style to Use? 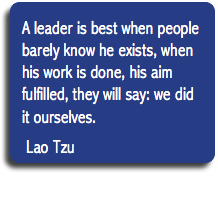 There’s no one leadership style that fits all leaders, all subordinates and all situations. It’s complex, but with thought you can begin to understand your own preferred leadership style which is a good place to start. A good leader also understands the environment and business needs, and can make any style adjustments necessary. Finally a great leader will understand their team members and their development needs.

A great leader will find a way to balance all of these dimensions to steer the team to sustainable high performance.

One thought on “5 Dimensions of Leadership”