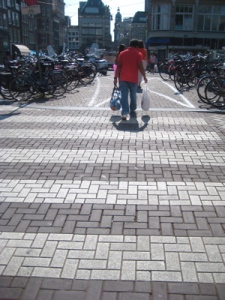 I was reminded of that this week when crossing the road – the one shown in the picture. It’s a little difficult to tell, but it’s a crossing and then a traffic island. On the other side of the traffic island – beyond the bicycles – are tram tracks. You can see it on the google satellite map.

Until recently that traffic island used to be a forest of bicycles and you really had to weave your way through them. It annoyed me, I really wanted to just kick the bicycles out of the way and under a passing tram (for the record I did not do this).

When I went through the city on Thursday I noticed that someone has painted a large white rectangle across the island with an ‘X’ in the centre of it. Marking it a no parking zone, and that’s all it took for cyclists to park their bikes in a way that leaves space for pedestrians.

There’s no sign saying that people may not park there, there’s no indication that the painting on the ground was even done officially, it could have been done by a similarly frustrated pedestrian in the wee hours for all I know.

But I’m fascinated that one visual clue is enough to trigger the mass of cyclists to change their behaviour.