Yet another way to assess your influence in the twitterverse, from Tweet Grader.

They’ve had fun with this and it’s worth trying just for the “while you wait” messages.

Those with a higher influence get listed as “twitter elite” for their location. No, I’m not yet in their exalted ranks – something to aim for perhaps.

Oddly I found this because I was trying to find out when I joined Twitter, and it’ll give you that information and a summary of your profile. 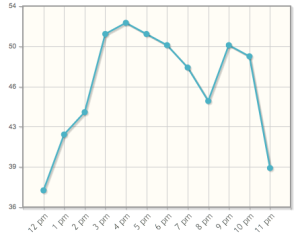 Find out when your followers are most likely to be online via tweriod.

Apparently the activity for my followers on twitter is mid afternoon and evening. I’m mostly on twitter for fun, so this has less impact on me than on someone tweeting professionally. But I will try scheduling my blog releases for the afternoon and see if I can detect any impact.

For those using twitter professionally there are plenty of tools around to schedule tweets throughout the hours where you’ll get the most attention.

There are several tools out there to send timed tweets, my tweets are real time apart from when I tweet about a blog post.

Every so often I take a look through my twitter followers, I want to know who’s following me, it’s always interesting to see who is new on the list. I also would like to compare that to who I follow, and I’d like to know if some accounts have changed or died. Twitter Karma lets me do that.

It also lets me unfollow accounts very easily (ouch!) which I did test and the change is instantly picked up on your twitter count. I unfollowed about 10 accounts that seem to be inactive; housekeeping, nothing personal.

There are lots of tools out their for the professional user, to set up timed tweets, to monitor followbacks, to automatically unfollow people. But for my use, which is at a much simpler level, these are some of the tools I need.