Code for a Quick Response

QR codes – It’s a divisive topic in my team, some people think they’re pointless, others think they’re cool. The second group is winning at the moment and I now have QR codes on my business card that links to my linkedin profile. 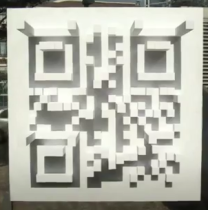 I think they’re brilliant if used well. Which turns out to be a pretty big ‘if’. The stupid uses of QR codes are legion, so legion that wtfqrcode.com has new additions every week.

So think before you start using QR codes, here are some questions to ask yourself;

1 Who is my target audience?

QR codes require the user to be carrying a smart phone with a QR reader installed on it. Sales are growing, but in most European countries the smart phone penetration is still below 50% (source; ThinkWithGoogle.com). So only half the general public have the tool needed to read your code. Halve that again – apparently only half of all smartphone users bother to read QR codes (source; Telemedia conference Oct 2011).

In general the younger, richer and better educated your audience are the more likely they are to read your QR code.

2 Where are you putting the code?

Scanability is highest on flat, smooth, stationary surfaces. Phones can scan QR codes from a short distance, but only if thought has been put into the size and resolution of the image, qrstuff has produced a guide.

There is no sense in putting QR codes on posters in the London Underground on the side of the tracks away from the platform, or on billboards, or in subways where there in no signal. There is absolutely no sense in putting them in an email, I’m already online – just give me the link. And if I’m accessing my email from my mobile device the situation gets worse, as Scott Stratten points out.

QR code is a fancy name for a link, so when you scan it what happens – where do you go? It better go to a mobile site since the scan is taken on a mobile device. There should be a something in it for the visitor – not just a way to generate traffic.

So connect it to a specific offer, or to information needed at the location – not to your company’s generic company homepage. Better yet connect it to something that will help your customers. Tesco, known as Home Plus in South Korea, created a shopping experience via QR codes which is the best example of a customer service approach I’ve seen. Wish we had this in Amsterdam.