When Danny Boyle included social media in the opening ceremony did he couldn’t have known that the downside of social media would be thrown into the spotlight by the athletes.

First, before the games had started, Voula Papachristou who was due to compete in the triple jump tweeted

“With so many Africans in Greece, the West Nile mosquitoes will be getting home food!!!”.

She was promptly banned from the Olympics – before she’d even left home.

The star posted the message shortly after the game, saying that South Koreans ‘can go burn’ and referred to them as a ‘bunch of mongoloids.’

The twitter account has since been deleted and Morganella has been banned and sent home, he won’t be helping his team in the upcoming games Athletes competing at the Olympic know that they’re being watched, they know that twitter is public, and that they attract large number of followers because of their role in sport. 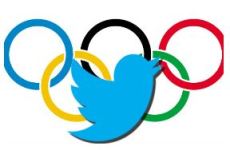 The IOC has set out guidelines for acceptable social media behaviour by the athletes. Unfortunately the supporters have not signed up to a code of conduct. Morganella claims his tweet was in response to various tweets directed to his account after the Swiss loss.

Another supporter tweeted to Tom Daley’s account. Tom Daley is competing at his second Olympics and in the synchronised diving event yesterday he and his dive partner came forth following a mostly great performance. Unfortunately for the pair the standard is so high that one “off” dive puts you out of medal contention. It was a big disappointment for them, and the supporters of Team GB. One of whom tweeted his disappointment earning him a RT from TomDaley1994

After giving it my all…you get idiot’s sending me this…RT @Rileyy_69: @TomDaley1994 you let your dad down i hope you know that

His 770,000 followers took up his cause creating a #GetRileyy_69Banned hashtag. The Rileyy_69 account has tweeted more than one apology, and declared that they’re “actually a really a nice person”. That may well be true, but the twitter account is full of abuse, racist comments and swear words masquerading as banter so I’m doubting.

It’s a bit of a storm in a teacup, and I hope it doesn’t detract from Tom Daley’s training.

But all of this is a good reminder about using social media guidelines. A set of well constructed guidelines should;

Most people representing your company will want to do the right thing, but there will be occasions where it goes wrong – perhaps as a simple mistake or a thoughtless comment made in frustration rather than maliciousness. But all cases require action.

The biggest thing to remember is that anything put on social media is permanent and public.