When Fixing it is the Wrong Answer

Most of the time when stuff goes wrong our natural reaction is to try to fix it. Especially when we know how, or when there are people relying on whatever is broken or when the need is urgent. 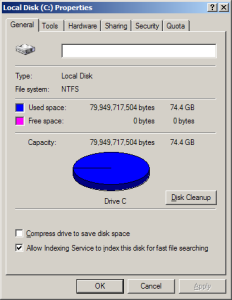 Years ago, when it became fashionable to put big images into powerpoint and possible to use video in a presentation, we had a server capacity issue.  Our department was the last one left in a building and we’d be moving in six months time so our company’s IT felt it wasn’t a priority to install more server space for us.

The result was that every few weeks we’d get panicked calls from colleagues who could no longer save documents, and when we checked we see the disk space properties screen like the one shown above for the shared drive. “Free Space: 0 bytes”.We’d call IT and their solution was to suggest that we remove old or unused files (not a bad idea in itself). So my colleague and I would spend hours putting old files onto DVDs and clearing up enough space so people could work again. We were heroes.

The first couple of times it was pretty easy, but as the rate of content creation increased pretty soon we were struggling to find “old” files. With the result that more than once we removed something that turned out to be needed. We were demoted from heroes to demons pretty quickly.

One weekend the department head came into the office to work on a Presentation of Great Importance. He managed to crash the server, and then could get nothing done. He was furious. His fury only grew when he found out that we’d been limping along with insufficient server space for months. A new server was installed at unheard of speed; days rather than weeks.

He pointed out, quite rightly, that people’s time is worth more than the cost of moving a server.

I thought then that I should have let the server fall over the second time IT declined to help. Sometimes fixing it is the wrong answer.