People got famous on the internet

My favourite for 2013 was Batkid. In an event organised by the “Make a Wish” foundation a five year old cancer survivor went on missions with Batman. There were (volunteer) actors set up and real baddies arrested. I wished I’d been in San Francisco to take part – it looked like a lot of fun and this kid is a hero.

Lots of other people got famous on the internet; here’s a roundup of some of the best.

Some cool stuff happened on the internet

Here are three that raised the bar.

Real Beauty Sketches from Dove, for a while this was showing up daily on my twitter and facebook feeds. Dove continued it’s theme of women’s own beauty by asking an artist to make two sketches one based on a woman’s description of herself, and the other based on someone else’s description of them. The differences in the portraits are striking, and the reactions are touching. Dove are finding creative ways to demonstrate their commitment to the

Hashtag Killer was a campaign to draw attention to the thoughtlessness behind the #FirstWorldProblem hashtag, while raising awareness of real issues in the developing world. It’s tempting to conclude that some people just don’t get irony – but the campaign is effective and went on to win a Webby.

Oreo’s blackout tweet was sent out during the superbowl 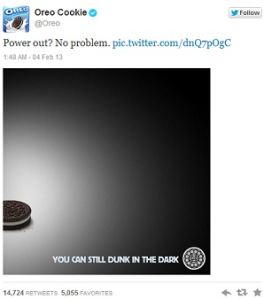 (apparently a big sporting event), when the lights went out at the stadium. Their tweeted image was funny, timely and got thousands of retweets. But that’s not why it’s raised the bar.

Oreo understood that social media is real time, they knew their audience would be watching on two screens (one for the game and one for social media), and they had an in-house team of 15 people ready to work with whatever happened.

Increasingly social media will be integrated with traditional media/marketing and communication initiatives; that requires integrated and flexible teams.

For more of the good stuff see the Webby Awards winners, or the Business insider list

Some people started using vines immediately, and there are some pretty funny compilations on youtube – hours of entertainment. Brands took a little longer, my favourite for the year comes from Airbnb. Not only did they use the new technology in a smart way they did it via crowd sourcing.

You can see more brand creativity with vine, I’m sure there’ll be more in 2014.

And some un-cool stuff happened in social media

Companies are still struggling to understand how to use social media, there are long lists of social media fails from Business Insider, econsultancy, and the UK Telegraph.

But there was a late entry that beat most of those from a PR professional, the infamous Justine Sacco tweet, even people who are supposed to be digital savvy can screw up. It’s a reminder to think before you post. If in doubt – delete.

Something Funny to Finish

Mostly I follow people on digital expert type people on twitter but there are a few humour or parody accounts in their for light relief, one of my favourites is featured on this list of the 40 funniest tweets of the year.