Final day at the Web Summit, it’s been a blast. So much knowledge and inspiration in one place, and I only got to experience a small part of it. Great organisation, all sorts of complex logistics thought through, some fantastic speakers. And Dublin, you were a charming host. Here are some of my highlights for the day. 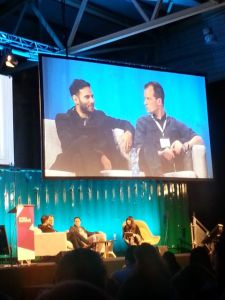 According to the panel Millennials require marketing to be authentic “you can’t bullshit them”. Which raises the question – which audience could  you bullshit?

A large percentage of millennials feel they’re not represented in the media, which begs the question who is the media representing?

I admit I get a bit irritated with the discussion of Millennials, it tends to position them as special, but when I read an analysis of what Millennials need it seems to be what workplaces should be offering everyone.

Advertising remains a challenge, looking to solve it with formats with a higher impact; specifically fullscreen video or large images making messages legible, (hmmm, what happens to my data roaming allowance if I do this?).

Still see tracking across platforms/devices as difficulty, but we know mobile has leapfrogged other media and is now ahead of radio, magazines and outdoor video.

Mobile is already the primary method of communication with clients; eg in banking, where people visiting branches one or two times a year, online twice a month, but may use their banking app

This was more of an argument against creating silos in digital, something I find easier to agree with, and it contained the quote of the day

User experience is like fairy dust – sprinkle it on everything

You can see the whole presentation on slideshare.

A discussion with Sarah Wood (Unruly) and Rachel Schutt (data geek at Newscorp) about the need to create a culture of using data, not just bring in data for the decision moment.

How do you solve the world’s impossible healthcare problems? One by one.

The Not Impossible Foundation crowd sources ideas and builds sustainable solutions – like a 3D printed prosethetic arm for Daniel, a young man in Sudan. They didn’t just solve the problem for one man, they trained local technicians and left the equipment at a local clinic so more people can be helped.

I love it when technology changes lives in such incredible – but not impossible – ways.

As Hubspot grew there was a need to define how they worked, what the company values were and what that meant to the company. He began by thinking this was easy, but it became one of the hardest things he’s worked on.

Along the way he realised that culture  grows organically and it’s hard to define as he put it “the first rule of culture – you don’t talk about culture”.

Eventually the Hubspot culture code was developed, which has become one of the most read documents on organisational culture on the internet. It’s defined as “part manifesto, part employee handbook, part manifesto of dreams”, take a look – it describes a place we’d all like to work.

The slideshare of the conference presentation has been removed – but there is an updated version on the Hubspot blog. (Louise October 2018)

Why spend time on culture?

It was a great presentation, but my favourite part of the presentation and of the culture guide is the principle that you should have as few rules as possible – expect employees to use good judgement. My presentations on building social into a company includes the line “people are nice; you can trust them”.

Coca-Cola use social media to do “real time marketing”, monitoring social media for insights and turning those insights into content to respond. They can also ramp up for campaigns around events. For example they had a team at the World Cup in Brazil made up of Coca-Cola employees and agency staff who could read social media data, create content, buy media. The team turned out 10 TV commercials, 12 infographics and 16,000 responses over the 32 days.

They see that the “always-on” marketing should ideally be done by the brand, not outsourced to an agency. It’s a big commitment from the company involving 130 people world-wide working on real time marketing. Having the right people in the team and in the room together means they can respond quickly. In fact the vast majority of content around Coca-Cola is created by fans, around 85%.

Is it “kids playing on social media”? was a question posed. The answer was a clear “no, these are graduates with expertise and the tools to do their job”. Good to hear someone busting that myth.

The Qualtrics company is behind collecting all sorts of research and marketing data, including feedback on the conference. Their team was wearing T-shirts with geek slogans such as “I’ve got 99 problems but getting data ain’t one of them”.

The company started in Ryan’s Smith’s family basement, and it was a long time before they needed – or took – any capital. It’s a great “start-up to success story”, and my favourite comment from it was “Qualtrics aim to do hard things; and want their employees to emulate the competent – not the confident”.

The final session on the mainstage is a discussion about the future of music, entertainment and what technology is doing to that. It features Dana Brunetti (producer of House of Cards), Eric Wahlforss (co-founder of SoundCloud) and some guy called Bono.

The moderator cracks a joke about the new line up of U2, and the panel claim the instrument they’d play – I don’t think anyone volunteers to be the drummer.

The questions are serious and so are the answers, this is an industry mid-change, there’s room for new models. But as Bono repeats; the artist must be paid, they don’t believe in the freemium model. Turns out as rich as U2 are they didn’t give away Songs of Innocence. Apple bought it, and then gave it away.

It’s a good discussion, but a tiny part of me wishes the line up were a little different… and the band were playing.

And that’s it for another year. You can watch the day’s live streams by signing up for next year’s conference.

Massive thanks to the hundreds of people involved in the conference, you did a great job (but next year fix the wifi).