I am constantly connected, both at home and at work, often via multiple devices. And it’s not just my phone and laptop, increasingly service apps are online – I can control my apartment temperature  from the other side of the world via an app. Lots of services are online, I do all my banking online, I’ll do my tax return online soon. I’ll shop online, including for dinner delivered. At work I’m online all the time. My functional life is online – if wifi goes down I’m really stuck. So internet is hugely important. But is it a human right?

The original UN Declaration of Human Rights doesn’t mention the internet, but then it was written in the 1940s so that’s not surprising. However it does list a number of rights that are increasingly accessed via the internet, including the right to;

These are all available online

It’s only a matter of time before these are available only via the internet. It’s such a clear trend that in 2011 the UN declared internet access a human right, noting;

The Special Rapporteur underscores the unique and transformative nature of the Internet not only to enable individuals to exercise their right to freedom of opinion and expression, but also a range of other human rights, and to promote the progress of society as a whole.

But what action follows this declaration? How can governments ensure that access is fair? And what happens when fair access does not exist?

There are a lot of government and business initiatives to ensure universal access to the internet, although in many cases the individual would still need to provide the device; 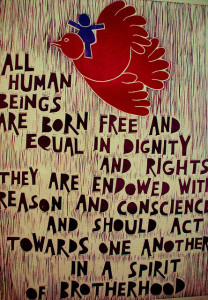 But not all governments are doing so well. The Syrian regime seems to shut down the internet for hours or days at various times. China famously has “The Great Firewall“, which uses a range of blocking techniques to filter sites and content. And governments of democratic nations aren’t immune to the temptation to turn off internet access in times of crisis, as UK’s PM David Cameron showed during the London riots in 2011 (in this case it did not happen).

But even outside these extreme examples internet access remains very unequal. Jon Gosier, who has worked on some of the big issues of technology inequality, talks about how our thinking around technology as an improver of lives is flawed and asks the vital question – how do we include everyone?

There are a few organisations around the world working on ensuring full internet access, including A Human Right, which in 2012 campaigned to have a planned undersea cable moved 500km south so that it could serve the isolated island of St Helena. Their site and twitter feed appear somewhat moribund so it’s hard to judge real progress.

Alliance for Affordable Internet is a public-private partnership that works to provide affordable broadband and mobile access to the internet for everyone.

But the most interesting “bet” on securing global, universal access to the internet might come from the private sector. Elon Musk, CEO of SpaceX has a vision of creating a “space internet“. And Google have a mad idea involving balloons, called Project Loon, that might just work.