Whew, we made it. It’s the end of a challenging year for me, but looking back some pretty cool things happened.

This is the season of lists, a quick search for best of 2015 on Google gives me “about 9,020,000,000 results” in less than a minute, which is more than on per person for the entire world. They range from the sensible Best Tech of 2015 from Mashable to  Viral Videos of the Year from Buzzfeed. So rather than add to that I’m going to highlight things that struck me during the year.

Much of the news this year has been tough, frightening, even gruelling. Some amazing things happened as well, sometimes coming out of disaster. Following the devastating earthquake in Nepal, for example, geeks banded together to map the disaster and support rescues.

Meanwhile Anonymous have taken on ISIS; masked activists are taking on real world evil using a virtual medium is a tale that sounds more Hollywood than reality and yet here we are.

In more strange news, the British public has petitioned their parliament to ban Trump from entering the UK based on what they term “hate speech”. At the time of writing more than half a million people had signed the petition, easily exceeding the 10,000 threshold needed to force a discussion in parliament.

And then there were the thousands of acts of random kindness that didn’t make the news, but did make someone’s day.

Ireland voted to make gay marriage legal in May, with many young people travelling back to Ireland in order to cast their vote in the #HomeToVote campaign.

Following the Paris attacks in January and in November the world showed its solidarity with France, by lighting up national monuments with the French Tricoleur. Despite the seriousness of the events and the sorrow of so many, the Belgians maintained their sense of surreal humour in the response to the police lockdown of Brussels in which people were asked not to disclose police activity on social media. They posted cat pictures, under the hashtag #BrusselsLockdown, scroll down to see how the police responded.

On a lighter note, a festive hashtag brought out the best and worst of literary puns.

Surprisingly some companies still haven’t grasped that there are risks as well as benefits to using social media, or that there are ways to test or limit those risks. Here are some of the biggest fails of 2015.

The intention behind this was probably good, working towards better race relations in a divided society where #BlackLivesMatter campaigns were under way. But the idea of discussing race issues while you get your coffee didn’t resonate with customers and  the  reaction was swift and harsh, the campaign was soon withdrawn.

For those not from Australia or New Zealand, Anzac day is the day we remember those who died in wars. It’s taken seriously and the name “Anzac”, which stands for Australia New Zealand Army Core, is a protected term.

So when a supermarket chain tried to use it in a campaign it did not go well. There was significant backlash on social media, with abuse of the “meme generator” they’d installed on their site, followed by a request from the Veteran’s organisation to end the campaign.

(3) SeaWorld and their #AskSeaWorld campaign

If your company has a reputation issue then offering an “ask anything” opportunity on social media is a Bad Idea.

SeaWorld, or their social media agency, didn’t agree with that statement and launched a #AskSeaWorld campaign. The response was predictable;

SeaWorld win biggest social media fail of the year, not just because of the poorly thought out strategy but because when the inevitable backlash started their reaction was to label people as trolls and posted responses such as “Jacking hashtags is so 2014. #bewareoftrolls “. Not cool.

The end of Google, or rather the end of Google as we know it. Alphabet was born, as an corporate holding company allowing them to be recognised for more than their search/advertising industry.

Apple vs Taylor Swift, and she won. The music industry seems to still be transforming.

Hoverboards became a thing in the “future” specified in Back to the Future, and we all wanted one. Then some of them caught fire.

Best book of 2015 (as in that’s when I read it) was Creativity Inc, by Ed Catmull and Amy Wallace. It’s a breath of fresh air, with inspiring discussions about business and leadership, a fascinating glimpse into the workings of arguably the world’s most creative company, and there are generous dots of humour. It’s so good I messaged a friend quotes from it until he bought his own copy. I will review it more fully in the New Year.

A timely reminder in the season of family togetherness. 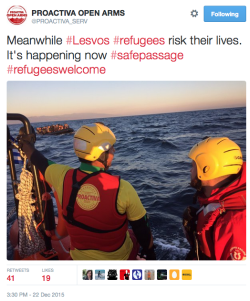 The people on the island of Lesvos who have put their lives on hold to pull people out of the ocean. Saving lives every day despite dropping temperatures. The politics around the Syrian crisis are messy and complex, but these people have got to the crux of the matter; the people are coming and they are dying.

If you can spare a donation there’s one organisation, Proactiva Open Arms, that is totally donation funded, started by a bunch of guys from Spain, and you can donate online.

This was a strangely good year for travel; In my last job I met with colleagues from around the world visiting Dubai and Johannesburg for the first time. I also enjoyed some memorable personal travel; I spent time with my family, and helped my mum achieve a lifetime dream of watching a grand slam tennis tournament. In September I made it to Milan to see the World Expo, I was lucky enough to get VIP treatment there and got to see a lot in just three days. I headed to Dublin for the WebSummit, which is a sort of geek heaven. And to finish the  year I rocked up to Vienna to meet up with friends from around the world for a sort of “Un-Christmas” celebration.

A great mix of travelling for family, for pleasure, for work and for learning. I’d like to have more of that in 2016!

This is my last post for the year, thank you for all the feedback, comments, and tweets we’ve shared this year. See you next year!