How Dumb are Those Rules?

I’m not a fan of bureaucracy, I try to avoid, reduce or eliminate it when it’s in my power to do so. However I’ve also worked for large companies where a certain amount of bureaucracy is inevitable and I’ve worked in regulated industry where the regulation is there there for a reason; to protect the health or the finances of customers.

So when I came across and article that talked about 10 dumb rules that make your best people quit I was initially cheering.  But some of those rules are there for a reason; sometimes the reason is the law and sometimes it’s a real risk and sometimes it’s just that not everyone is honest. So I decided to unpack the rules further think about the reason companies put such rules in place and discuss how there might be a different way to work with such rules.

This is a lament about the black hole a resume goes into when you apply for a job. I absolutely agree with this, the process used by many companies is so disrespectful. It is not difficult to make a humane process for handing job applications, whatever the size of your company.

My best recruitment experience was one where I did not get the job.  Since then I’ve tried to follow that example – that might be a separate post for a later date.

In a large company you need to find a fair way of distributing the rewards, aka pay rises, and the performance review system is what has evolved to fulfil that task. I have written about performance management before and agree that it’s a flawed system; it’s not always fair, and even when people get good reviews they don’t like the process. Some companies are testing other methods, moving away from rigid review and stacked ranking systems. However all companies need to find a fair way to judge the performance of employees.

I think it needs to change. In the meantime managers can improve the process for teams by giving feedback throughout the year, and by being honest about the purpose of the dreaded performance review.

The article ends this subject with “Trust them to produce, and if they are not producing let them go” it’s not that easy under EU law to just let people go, and I think if you’ve hired someone and they are not performing you have a duty to coach for improvements.

One last reason to have a system that attempts to be fair; lawsuits.

Agree. With the tools we have available now onsite attendance can be optional in many jobs. I’ve always agreed to work from home agreements for team members. That trust has been more than rewarded; it’s meant that one team member avoided 6 hours of commuting per week, another could extend time with his family in his home country, and a colleague could help a sick relative. I have never seen any decline in work delivery – if anything the team members feel more dedicated.

I have often connected with the team member via some chat app. Not to “check up” on them, but to emulate the office situation and maintain a connection.

This came easily to me, perhaps because I’m used to working online, for many managers new skills might be needed.

“Do you really want your best workers to spend their time chasing people for rubber-stamp approvals?”

Oh man. This is one of my biggest complaints. At one company I had authority to make spending decisions on items in the tens of thousands but would have to get a 20 euro expense invoice approved before it was re-imbursed. In another I had a team member based in another country – the CEO of that country organisation had to approve her expenses that were being paid from my budget. (He did, and after the first time it was no issue).

This comes down to regulation. If you’re in a publicly listed company accountancy rules come into play and the company has to double, or triple check expenses and spending to ensure there is no fraud. Even though the company knows you’re trustworthy they can’t actually trust you.

Although I understand the need the approval request systems make me grumpy.  my team used to make jokes and take me out for coffee after I’d been filing expense reports. Perhaps the answer is coffee vouchers for every approval request?

5. Dumb rules for time off

“If a dedicated employee doesn’t feel good enough to come to work, what’s the point in making them drag themselves out of bed to get a doctor’s slip?”

Here’s a win for the European way! I think it takes six weeks absence before a doctor’s note is needed. Absences are monitored, repeat absenteeism is a sign of stress or longer term health issues. But the Dutch system is sensibly generous about this.

The article assumes that this is a reward for work travel, and should accrue to the employee doing the travel. That’s the system I’m used to here, but I have also worked for a government department where we could not legally accept frequent flyer miles. But then no-one could which is annoying but fair. I also know of one company that collates them and reshares them across all employees. Work travel in that company is usually only by senior people and is widely seen as a benefit and the idea that should only accrue to senior managers seems unfair to them.

I’d stick to it as a reward for work travel if I were making the rules, but it’s not a deal breaker in the grand scheme of things.

“I have worked with companies that put complete faith in employee engagement surveys, but frankly I believe they’re a sham.”

Agree. Having worked for a financial services company right through the financial crisis and seen the outcome of annual engagement surveys I noticed that the engagement scores trailed the fall and rise of the share price. 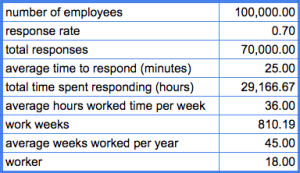 Few companies consider the cost of conducting an big scale engagement survey. In a company of 100,000 employees it could be 15-20 full time employee equivalents to complete it (assuming 70% response rate), do you get a commensurate value of improvements?

I’ve worked through the feedback process numerous times, and it becomes so complex and unwieldy that little is really achieved. I think you could do more by talking to people, using smaller targeted surveys, asking for feedback on your sites, and making smaller – more useful – changes.

Apparently some companies make staff check their phones in as they enter the company. I haven’t encountered this, although I have been asked not to photograph or record in certain areas of a company. I can understand the need in, for example, the design lab at Apple. But it’s not a rule that shows trust in employees, for most companies it’s overkill.

9. Dumb rules for internet use

I’ve seen Facebook and LinkedIn banned, and in fact blocked from company computers out of a fear of what employees might post. Well it just shifts the problem to out of work hours. A better solution is to talk to employees, make it clear what can and can’t be posted online. Employees can understand that discussing client information, sharing company results early, or dissing their manager might be a problem. Even better give them some good news to share!

While I’ve never come across a defined limit I can understand that in general as a manager you want people in the job you hired them for, it’s a pain in the neck to re-hire people all the time. My personal attitude is that if a person wants to move then it’s time for them to move – regardless of my assessment of their abilities or performance. I’m far more likely to recommend someone who has performed well for 18 months, than someone who’s been in the role for 3. But the roles I’ve managed have expertise levels that require a bit of learning. I might feel differently about managing wait staff in a restaurant for example where the skill set is simpler and success is more a question of personality.

I don’t love the bureaucratic rules, but having worked in regulated industries I grudgingly admit that I can usually understand the business need. That makes it possible for me to adapt and find the smartest process that will work for everyone – most of the time. Of course I still get frustrated, but then I take a coffee break and move on to the real work.