The iPad was announced in January of 2010, and launched in April. I was scathing. I couldn’t see what it was for, there was a lot it couldn’t do and I thought the name was terrible. Six months later I bought one, and I still have it. It’s still limited, but as a portable home entertainment centre it works well.

But it’s funny to read how negative I was about it. Mind you I wasn’t alone, Gizmodo, NY Times and Jezabel also saw the same issues. 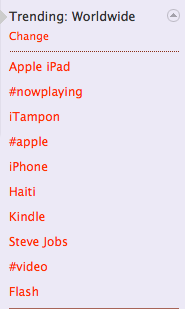 So the iPad was finally announced after a run of rumours over the last month or two. It won’t be launched until March/April, but there’s already a fever of anticipation on twitter, with about 1000 tweets per minute.

As far as I can tell from the launch video the iPad = kindle + iTouch – iTunes wrapped up in Apple’s high design ethic.

There are already big theories about what it will do, including making higher education irrelevant. The scenario described is more or less using iPad as a tool for eLearning – but eLearning is already used in masses of university and executive education that I don’t see having a new tool as an obvious game changer. If Apple can get enough of the educational material online then perhaps it will transform educational publishing – that is not the same thing as higher education.

So what will it transform? It’s finally a competitor for Amazon’s best selling Kindle, and it’s priced to compete with Kindle, sort of. Kindle is at 259USD and the iPad starts at 499USD, there’s a quality difference and then there is the usual “apple premium”. So although Kindle has already developed a market share, and developed agreements with publishers to ensure a steady stream of new content, they might be pushed to improve the reading experience.

I suspect the transformation will hit the publishing industry and the web/design industries. Both will push the boundaries of current web design to create content – including video and apps – that will be worthy of the iPad – because it is a thing of beauty. The flow of content might follow the example I wrote about earlier this month regarding Digital Magazines.

There are issues, lots of them; some, like the lack of Flash and limited browser, can change relatively easily. But the biggest we-are-all-12-years-old-again issue is the name, calling this iPad just shows they have too many boys in their marketing department. Women immediately connect the name to menstrual pads (see list of twitter trending topics above). Ignominious start for something billed as “the best web surfing experience”.

One thought on “iPad Revisited”