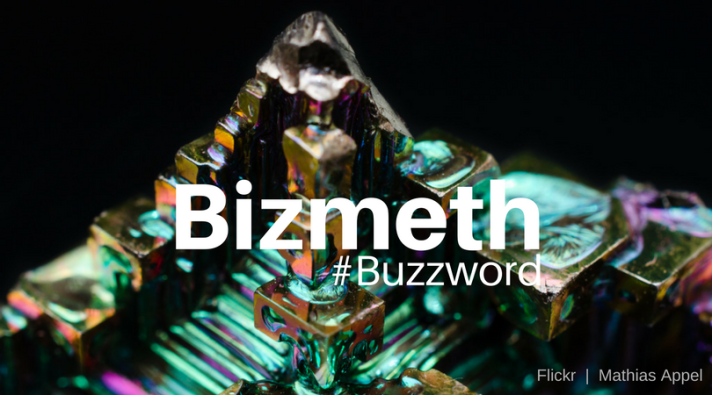 It sounds like a chemical, but that’s bismuth. (It’s bismuth in the image above).

Bizmeth is a portmanteau word made up of “business” and “method”. And although Collins dictionary didn’t think it was much in use in 2014 it’s now the name of a web design company, a consultant company and training company.

I heard it used by a consultant recently, I suspect it might be a part of consultant’s vocabulary since it saves a whole two syllables.

The definitions I’ve found of ‘business method’ as a term are very high level.

One site redirects to business process and cites ‘The series of activities undertaken to create a product or deliver a service.’

Wiki gives “A business method may be defined as a method of operating any aspect of an economic enterprise”. (And they’re quoting a paper from the Advisory Council on Intellectual Property).

So far so general as to be useless.

But there’s a difference in patent law, in the US it is possible to patent a business method, that is a process, rather than a tangible invention. In Europe it’s not possible unless the business method includes some technical element.  Which is why the patent troll industry is mostly in the US.

From now on when I hear “bizmeth” from a consultant I’m going to translate it as “process”.