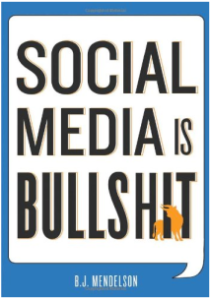 It’s rare that I find myself challenged by a book, agreeing with much of what it says and laughing out loud on my morning commute; this is that book.

BJ Mendelson’s stated audience is entrepreneurs and leaders of small business. Those who he sees as being victim to a deceptive social media industry. He has no beef with using social media for personal entertainment – but he points to a growing hype that if believed could be destructive to a company’s balance sheet.

For example, for a while the Dell story of making money from a twitter account used to sell discount items made headlines. The  magic number quoted was 3 million USD in revenue. Sounds like a lot of money – certainly more than in my account. But compared to all of Dell’s revenue in 2009 it was tiny, how tiny? Here’s a graph showing the revenue from twitter vs all the other revenue for Dell. 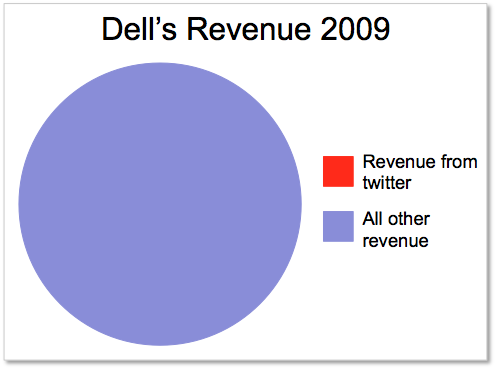 It turns out that the revenue via twitter is utterly dwarfed by the revenue from all other sources (61 billion USD). It was less than half of one percent of their total revenue. But Dell is a business so what did they get out of the social media? Mendelson points to a PR value; more than 13 million entries in Google’s search. (Note; a search for “Dell Twitter” now scores over 400 million search results).

Of course a large company can afford to try something in social media, and Dell has the klout in the business world and the advertising budget to make a success of their attempts. Which is Mendelson’s point; a lot of social media success stories are supported by large advertising budgets and the support of known brands. For a new brand or a small company social media probably isn’t the easy solution to marketing.

Mendelson is also pretty harsh on Facebook, pointing to its cloning or acquisition of ideas and its political activism against privacy restrictions (the book was written prior to PRISM). He argues that it’s redundant to build a Facebook fan base, since these people will visit your website anyway. Better to build a website with good content rather than to hope they’ll see your post in the 30 minutes it’s available in their timeline. If it even appears in their timeline, posts apparently only reach 16% of your fans.

There are of course good uses for social media by companies, Twitter has become a customer service channel for many companies. And Facebook is being used as a web platform for a number of cafes here in Amsterdam reasonably well. They do run the risk that the platform could disappear in the future, but for now it’s a free tool, free hosting to get a simple web presence out there. But it’s certainly not the solution to all marketing problems that some sell it as.

So what would good marketing look like? Start by making a good product,  make your product easy to use, get people behind your product via traditional media, improve your product using customer feedback. Not rocket science really.

I have said for a long time that you should use social media to achieve a business goal, and measure that goal; not fans or likes. Which is why there isn’t a simple play book for using social media.

Mendelsons’ book stands out as a refreshing, somewhat cynical take on the social media industry.