This video came up on the Facebook page of Clementine Ford, an Australian Feminist. It’s about “unconscious bias” the biases we all carry that affect decisions we make, including hiring decisions. It cites the orchestra that auditioned musicians from behind a curtain so that the judges could not determine their gender. Now an Australian film festival is doing something similar after noticing that only 5% of finalists were women, following blind judging that number rose to 50%.

Sexism is not the only bias judges and employers hold, there are reports from the US, Canada, the UK and the Netherlands that associations of race and nationality are made based on a person’s name, often to the disadvantage of non-white candidates. And we all remember the Academy awards a few years ago releasing #OscarsSoWhite.

We know that diversity is good for business, but we’re bad at it.  So how could we make our hiring or judging processes better for diversity?

You need to make the unconscious bias visible. In the Tropfest case the organisation looked at their finalists and found that only 5% were female. I’d bet good money that was a lower percentage than anyone realised before doing the research.

Do some research in your own organisation; how many women and minorities are hired? How many are making it through to the highest decision-maker level? If you’re organising a conference do you have a diverse range of speakers? (if you have to try harder it’s your network at fault) If you’re an award giving organisation how many of your nominees are people of colour, LGBT+ or women? And how many of your judges… you get the idea.

Be aware of stereotypes associated with roles, I had a somewhat technical role in a communications department. The head of department congratulated me on helping the department’s diversity figures by hiring a man into a comms team. In reality I’d hired a guy into a slightly technical team – hardly striking a blow for equality. (For the record the gender split in my team was 40:60 women to men, while across the department the split was around 70:30)

Make sure your company policies and practices encourage diversity – write new policies for your organisation if they don’t. Hint; do this with a diverse group for best results.

I wrote about other steps you can take in an earlier post called Diversity Works. This won’t get better just on good intentions, you will need to take action.

We all gravitate towards people who look like us, sound like us, share our values. Start building your network to be more inclusive; follow people on twitter who are not like you, read different perspectives, listen to speakers from radically different backgrounds. LISTEN to what they have to say. Resist the temptation to disagree, to put your point of view, to defend yourselves (this is the misstep made by all those well meaning #notallmen posters).

One of the best posts around on this is from Tin Geber, he’s talking about male privilege in relation to inviting women to speak at conferences, but the principles still apply. As he concludes;

It’s on me — and each person reading this — to actively strive to rebalance the playing field.

The Australian Film Festival went to 5% women finalists to 50% women finalists. They measured their progress and then they talked about it. It must have given aspiring women film directors a boost.

Measure your progress, and talk about it only once you have seen specific improvements.

A lack of diversity won’t change without specific, sustained action. Starting with people of privilege listening and making room.

Diversity works. I know this from personal experience, I’ve always sought to hire people from a range of backgrounds. I know I don’t have all the skills needed in my team so there’s no point hiring more of me. To be specific I’m not great at fine detail; I can go through massive ugly spreadsheets but it’s not my strength. I hire people into my team who have those skills and I value them – partly because I admire the skills and partly because I’m so grateful. In addition for me it’s more fun to hear about Romanian culture, Spanish idioms and Turkish cuisine over lunch than all Dutch stories.

But you don’t have to take my word for it. McKinsey’s research reports a “diversity dividend” of 15% for companies that are gender diverse, and a rocking 35% for companies with ethnic diversity. Correlation does not equate to causation; it may be that high performing companies choose diverse workforces and executive teams rather than diverse teams causing improved performance.

The studies mentioned so far focus on gender and cultural diversity, but we should look at other personal characteristics such as national origin, age, gender identity, sexual orientation, and ability/disability. I’ve also heard one argument that the NASA team responsible for the first moon landing was more diverse than today’s team; back then there weren’t specialised astronautical studies programmes so the team was the best they could find from a range of fields. Which suggests we should be open to different training and work experience backgrounds (when the role allows it; don’t hire a plumber to a medical team!) 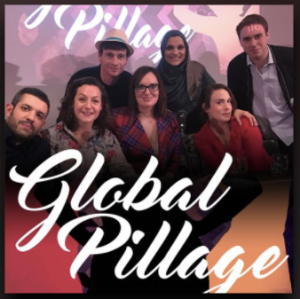 For a very light-hearted look at diversity, in fact an experiment in diversity, listen to the Global Pillage podcast. Each episode takes on a theme and opens with contestants identifying the ways they are diverse – gay, transgender, brown, immigrant, multi-lingual, vegan, left-handed all get a mention. The format is then a quiz between two teams of two people, with the audience able to give their answer. Spoiler alert; the audience (a bigger and presumably more diverse group) usually wins.

To get a more diverse team you have to change how you hire and how you work. Here are some ideas to get you started.

I’ve lived in several different countries, I’ve learnt several languages, my influences are from different sources. For me diversity is an important part of the work environment and yet from the outside I appear to be of the majority. Maybe diversity practices are good for us all.

Two pieces of good news from the world of toys last week.

Barbie got a make-under

As iconic as Barbie is she’s been under fire for years for perpetuating an unrealistic body myth for girls and young women. Someone has gone to the trouble of calculating the probability of a woman having Barbie’s measurements; for Barbie’s neck measurement it’s one in 4.3 billion. For a long time doctors, teachers, parents and feminists have raised the issue of “the Barbie effect“.  She’s encountered criticism for her career performance as well, when cast as a computer programmer. Mattel have seemed reluctant to make big changes, but in 2013 sales dropped. 2015 saw the launch of some

Mattel have now launched a new series of Barbie dolls, the Fashionistas; with 4 body types, 7 skin tones, 14 face shapes and a myriad of hair colours. 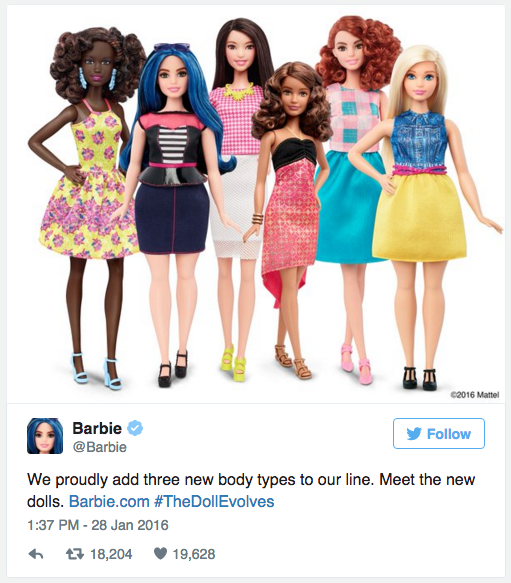 This is just some of the range available.

I broke the internet rule and read the comments on this article from the Guardian.  Many commenters don’t believe this is an important step, stating that dolls are part of fantasy play. Yes, of course, but the dolls are our own avatars and it’s great that these dolls give children a choice that is more like themselves.

Legoland gets a wheelchair

Lego, another toy brand that has been under fire for its designs in recent years, has launched a wheelchair that will fit any minifig as part of its “Fun in the Park” set.

It may be in response to the Toy Like Me campaign which seeks to have better representation of childhood toys with disabilities. They’re in the middle of a crowdfunding campaign right now, check it out and give them your support.

I’ve heard all the arguments about “it’s just a toy”, “kids don’t remember this stuff” and “changing toys doesn’t change the world”. To me this isn’t about creating a single memory, and I don’t believe changing how toys appear will change the world. But creating toys that demonstrate diversity could be part of a bigger change, it could widen our perception of what “normal” is, and it could be part of instilling pride in children who are outside the mainstream because they are in an ethnic minority, use a wheelchair, have glasses, use a walking stick or have red hair.

Children are very aware of the people around them and pick up on all sorts of nuances of people’s appearance. They’re also aware from an early age of when they’re invisible or excluded.  I’m sure that both Mattel and Lego have calculated the benefits of PR and profit from these moves, but I still applaud these moves to make their toys more inclusive.

Post Script; I didn’t have Barbie or Lego growing up, it’s the lack of Lego I regret.

Gary Carter begins by talking about his work as COO for FreemantleMedia where programmes are created for audiences identified “by gender, age and social class”. It is marketing 101; segment your audience until you have an approachable target that will still be profitable. He specifies that for the television industry we, the audience, are the product sold to advertisers.

He critiques the mass marketing segmentation by providing a contrasting classification of his son as “slightly under-weight, non speaking, second generation allochtoon child aged 10, with communication spectrum disorder who is co-parented by his birth parents and two allochtoon homosexuals one of whom, in the precise language of colonial ethnography is an octaroon, in other words an non-western allochtoon who is 7/8 white and 1/8 black.” Unsurprisingly there are no programmes for his son, who is also marginalised in society and in the education system.

He challenges us to rethink how we see difference, to interest ourselves in difference instead of looking for similarity. We should see ourselves as united by our differences.

His approach resonates with me; I’m a foreigner far from my home country, I don’t know anyone from my home country here, and I have chosen to be “other” by choosing to live here. I am part of the Dutch community but not Dutch. However because I look like my Scottish ancestors people assume I’m Dutch – until I speak. In a way that’s been freeing as I could forge a new identity in a sense, in another way it’s troubling because I have no cultural history and few common references with friends here.

Gary Carter’s presentation an astonishing and moving performance; rich with poetry, imagery and music. And it poses a wonderful question – what would the world look like if we valued our differences? How would businesses change? How would the entertainment industry change? Will technology every really allow the level of micro targeting of products and content needed to reach some like Lucio Albert Shabaz Shala?