Enchantment; The Art of Changing Hearts, Minds and Actions

I read this book ages ago, and liked it enough to buy a copy for one of my team  – and not just because I hoped he’d get to chapter 11 “How to Enchant your Boss”. It’s the usual combination of advice, examples and personal stories – and the content goes right to the end, unlike a great many business books which seem to only have three chapters of real content and then 10 chapters of repeats. 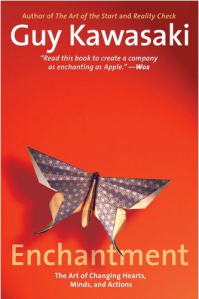 As I look through my copy now there are notes in the margins, a sign that I’ve either got something out of the book or been highly irritated by the author for some reason (or both). In the chapter titled “How to use push technology” Kawasaki says, in relation to tools like Twitter;

Give people the benefit of the doubt. Assume people are honest, smart, and decent – not dishonest, stupid, and conflicted. Don’t lose your civility when you communicate digitally. And assume everything you do is public and permanent, so  you are leaving fingerprints for anyone to see forever.

In the margin next to it I’ve written “Social Media Policy 101”, and it is the basic philosophy behind the social media guidelines we’ve just written for our company.

Kawasaki emphasises the importance of telling stories rather than giving data (although data has its place) or listing features/benefits. He walks the talk; the book is liberally sprinkled with personal stories illustrating his point – my favourite being Stephen J. Cannell’s story in the sub-chapter “suck it up”. Cannell was the creator/co-creator of a number of high rating TV shows, and he reports on a discussion about weak scripts he had with James Garner who said that when a weak script comes down he figures its the best the writing department could do in that week, and that it was up to the acting department to step up. What a pro. It’s an attitude we should all use – assuming our colleagues have done the best they can at the time with what they have, and step up our own game. (Garner went on to comment that Cannell had never sent him two bad scripts in a row).

“Enchantment” is an easy read, with ideas presented in a way that you can taste the inspiration or dive into something a bit more practical. Its focus is the softer side of change management – but deeper, about building the capability in yourself and your team to adapt, to build a better business.

And if you need proof that crowdsourcing can work read the “coverphon” at the back on how the cover got designed.