I read this tweet on July fourth, and I felt a little miffed. 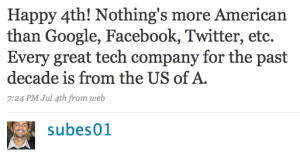 While the companies listed are great in their own way, and they’re registered in the US it’s a pretty big jump from there to “Every great tech company for the past decade is from the US of A.”

Plus, has Twitter made a profit yet? I think Twitter has lots of potential, but if a company has yet to make a profit then it seems a bit odd to listed as the greatest company of any type.

So I dug around and found that BusinessWeek has made a comprehensive analysis of the hottest tech companies for 2009. Their top 10 are;

Obviously this is a bit of an unfair comparison – the two clearly used very different criteria – but it’s interesting. First of all what criteria should you use? For years Amazon’s high growth led to low or no profits, and now it’s number one, so apparently the BusinessWeek ranking favours established companies rather than new entrants.

I suspect the tweet that started this was a flippant statement rather than the result of a great deal of analysis but it does indicate that the social media companies could be the rising stars; the next Amazons.

But if they are will they be American social media companies? Tencent, listed 9 above, is China’s biggest online chatting company with 400 million users. It doesn’t take much imagination to see the potential for a social media giant to come out of China, or India for that matter.