Marc Smith from Connected Action took to the stage at TNW Europe last week to talk about the use of NodeXL (watch his presentation on YouTube). He’d run an analysis of the first day’s activity of the conference, which is the diagram shown at right. Unsurprisingly it shows that the most tweet hashtag was the “official” #TNWEurope with all groups, the most active on twitter was the conference account, and the most tweeted URL was the conference live-stream. So far rather predictable.

But what if you wanted to know something about your community? Perhaps you want to find out how it was structured and who was using your main hashtag? Then it gets interesting; here’s an analysis of the #cmgrchat, a group consisting of professional community managers. 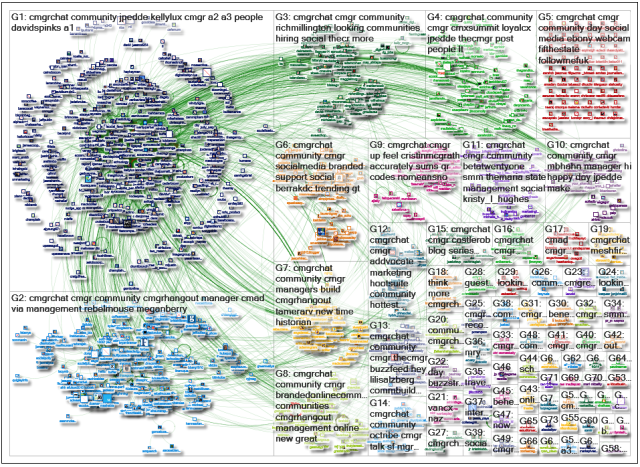 Which looks like clustered communities by the researchers own definition. There is an interactive version in beta which you can use to zoom in and find who is at the centre of a cluster.

A number of different patterns of networks have been discovered, from broadcast network to polarised crowds. There’s also a diagram on how to move from one type of network to another – clustered communities seems to be the best option, so it’s cool that the community managers have got it right.

The research team at Connected Action aim to produce tools to analyse social media and crowd behaviour online. They’ve produced the NodeXL tool, which uses excel as a data tool, and it’s free to download. It’s a potential tool of analysing networks inside your company since the tool is locally installed and relies on excel. You could then analyse who was key in your internal network and who was most active.

I looked at it but as I use a mac I’d have to install a PC emulator in order to use it and I hate that. It’s probably a function of the number of Microsoft alumni working at Connected Action. There is an alternative, you can request a NodeXL social media network map and they will email the data to you.