The “new way of working” where we are all interconnected and all available all of the time doesn’t work.

Companies are adding tools to their ecosystem every year to solve specific problems, and each tool seems to have its own notification and chat system.  Most of these tools are driving towards “real time communication” and this idea has been sold as a great feature, driving faster innovation and greater collaboration.

We already know that multitasking doesn’t work, it may even cause permanent brain damage. But we don’t need to neuroscientists to know that it’s hard to concentrate and deliver quality work when we are interrupted, and most of the tools supposedly delivering the “new way of working” are highly interruptive.

The default setting for our email system includes an icon notification, a pop up and a sound as the default notification. It’s easy enough to change but every so often a reboot will reset it to default. Imagine anyone thinking that a sound notification would be a good idea in an open plan office.

But is “real-time communication” a good idea? In a crisis it might be necessary, but most of the time we’re not working in crisis mode. In a recent Recode Decode interview Jason Fried said

…as a primary method of communication, real-time communication is a bad idea in most workplaces most of the time…People cannot get their work done at work anymore because they’re being constantly interrupted by all these real-time tools.

The constant interruptions break our focus, and it can take more than 20 minutes to recover our concentration. This cannot be good for productivity, every person I know has developed strategies to reduce the interruptions, including;

But could we also call on tool designers to rethink their notification systems from “push” to “pull”, perhaps they could allow us to schedule mini-breaks from notifications. Could system designers set up notification hubs where we collect the notifications for new work? Or could notifications get really smart and only appear when we’re working on the relevant project?

Imagine how much we would get done in a day without interruptions.

Having used twitter for many years, on two personal accounts and one work one, I’ve been using it less lately. And there’s a simple reason – the icon is no longer on my phone’s home screen.

Most apps give you a notification count in a little circle on the app,

in the image to the right you see that I have six notifications on my twitter account. It tells you that six things have happened on my account since I last looked. It used to be six interactions; new followers, people commenting on my tweets, and retweets. But about two years ago Twitter added notifications about updates and interesting links to its notifications tabs, and I was really quickly overwhelmed. I wasn’t alone. It’s Twitter’s effort to soak up more of your attention and keep you on their platform longer, it hasn’t worked Twitter still lags behind Facebook by miles, with 2.7 minutes a day and 58 minutes a day respectively.

Here’s what that means, Twitter recommended I’d be interested in tweets from these two gentlemen, you’ll note that I’m not following either of them. Mr Verbruggen’s tweet was in Dutch (I tweet in English) and mentioned him having a shower and a beer. I’m sure Mr Verbruggen is a perfectly nice man, I just don’t know why Twitter thinks I will be interested in his bathing habits. The other tweet was from Henry Winter, a sports writer. I am rubbish about sport, I only care about tennis and maybe the Silver Ferns when they play Australia I’m pretty sure I’ve never tweeted about football.  But Twitter thinks I might be interested in a book about English football? 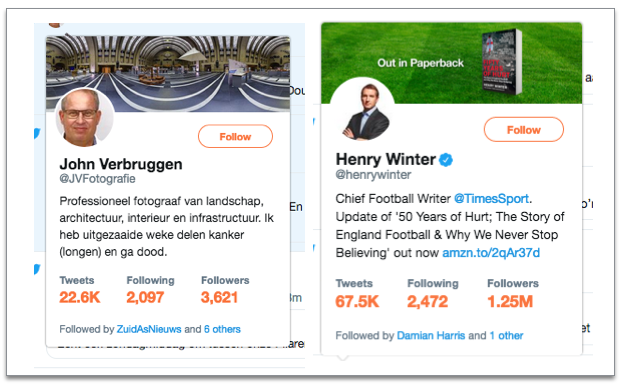 There seemed to be no way to opt out of this nonsense, and the twitter “recommendations” quickly overwhelmed the genuine interactions.

I got fed up. I moved the Twitter icon off my home screen on my phone, my twitter interaction declined. I once used it every day, It used to be my news feed, I followed people in tech, NGOs, companies I like, people I’d met at conferences and comedians. I barely look at it now except when I make a blog post.

Twitter’s efforts to engage me on the platform have had exactly the opposite effect. I haven’t even added the app to my new phone.

And would someone please notify me when this is fixed? Thanks.