Gary Carter begins by talking about his work as COO for FreemantleMedia where programmes are created for audiences identified “by gender, age and social class”. It is marketing 101; segment your audience until you have an approachable target that will still be profitable. He specifies that for the television industry we, the audience, are the product sold to advertisers.

He critiques the mass marketing segmentation by providing a contrasting classification of his son as “slightly under-weight, non speaking, second generation allochtoon child aged 10, with communication spectrum disorder who is co-parented by his birth parents and two allochtoon homosexuals one of whom, in the precise language of colonial ethnography is an octaroon, in other words an non-western allochtoon who is 7/8 white and 1/8 black.” Unsurprisingly there are no programmes for his son, who is also marginalised in society and in the education system.

He challenges us to rethink how we see difference, to interest ourselves in difference instead of looking for similarity. We should see ourselves as united by our differences.

His approach resonates with me; I’m a foreigner far from my home country, I don’t know anyone from my home country here, and I have chosen to be “other” by choosing to live here. I am part of the Dutch community but not Dutch. However because I look like my Scottish ancestors people assume I’m Dutch – until I speak. In a way that’s been freeing as I could forge a new identity in a sense, in another way it’s troubling because I have no cultural history and few common references with friends here.

Gary Carter’s presentation an astonishing and moving performance; rich with poetry, imagery and music. And it poses a wonderful question – what would the world look like if we valued our differences? How would businesses change? How would the entertainment industry change? Will technology every really allow the level of micro targeting of products and content needed to reach some like Lucio Albert Shabaz Shala?

Subtitle; What I wish I was doing today

TEDx is an independently organised event in the style of TED, and today there is a TEDx running in Amsterdam. They’ve got a fantastic line up including Kevin Kelley, who is one of the most intresting thinkers on future of technology and our use of it. They bill it as “In the spirit of ideas worth spreading, TED has created a program called TEDx. TEDx is a program of local, self-organized events that bring people together to share a TED-like experience.” 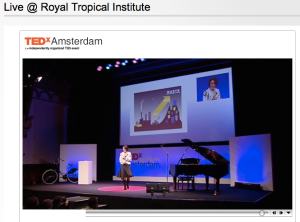 It’s enormously popular so that the 450 seats at the Tropen Museum are filled (and were already filled by the time I heard about it), so there are at least 4000 people who wanted to be there and can’t. TEDx set up various simulcast venues, those closest to me are also filled.

So I have the laziest option of all. I’ve picked up the streaming video site. I’m at home on the couch, watching TED. What a great Friday.